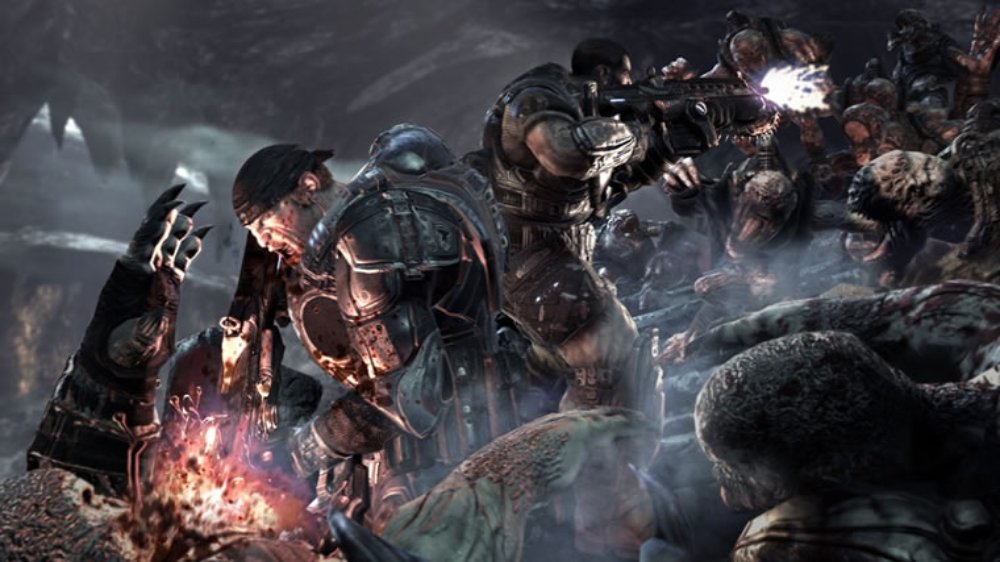 From the moment Xbox 360 launched in November of 2005, everyone has been waiting for the “killer app” that would single handedly justify purchasing the console. The original Xbox of course had Halo. But since Halo 3 was a long way off, gamers turned to Gears of War. Ever since its first showing at E3, fans have been dying to get their hands on this graphically stunning game. With Microsoft hyping the game as the next Halo, expectations could not have been any higher. The good news is that all that hype was well deserved. Epic managed to deliver on all of its promises and provide a compelling third-person action game.

The game opens up with Marcus Fenix being busted out of prison by his best friend Dominic. It appears Fenix was imprisoned for disobeying orders during the initial locust invasion by trying to save his father. Apparently things have gotten significantly worse since his incarceration and humanity needs every bit of help that it can get. With a full pardon, your initial objective after escaping the prison is to meet up with Delta Squad and stage a rescue mission for Alpha Squad, which is in possession of a weapon that may have the power to turn the tide of war. That’s about as deep as the storyline gets; there is not any more back-story to the conflict or anything like that. But that’s not to say that it doesn’t keep you interested. The game features quite a few excellent in engine cut-scenes that move the story along at a good pace. The combat chatter between the soldiers in your squad gives each of them a unique personality, even if they aren’t very deep characters.

While the storyline is only average, the gameplay is exceptional. The combat is very intense, forcing you to take cover whenever you can. Taking cover feels very natural, making it easy to pop in and out to shoot. You also have the ability to shoot blindly around corners to stay concealed, but it is not very accurate. The enemy AI is pretty good at shooting you when you pop out, so you only have a few seconds to fire before you need to take cover again. This makes flanking an especially effective tactic allowing you to rob the enemy of their cover while keeping your own. The enemies put up a pretty good fight and will attempt to flank you as well, keeping you on your toes. You also have a squad with you that you will be able to issue limited commands to. They do a pretty good job of distracting enemies, allowing you to sneak up behind them. They also do a decent job of taking out enemies on their own, which is good because you are usually outnumbered. 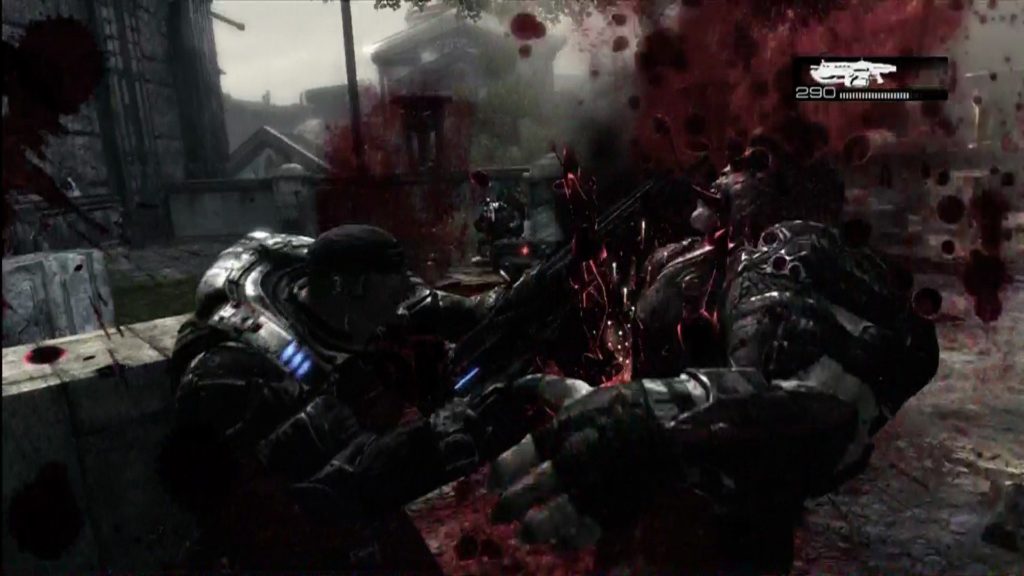 If playing with an entirely AI squad isn’t your thing, the game has the ability to play the entire single player campaign with a buddy. This can be done via split-screen or over Xbox Live. This can make the game considerably easier, allowing you to work with your teammate to flank enemies. You can also revive your teammate if he goes down as long as he doesn’t die during one of the sequences where you and your teammate split up and go down separate paths. Playing over Xbox Live was extremely smooth without a single hit of lag.

To take on the locust horde, you have a pretty good selection of weapons. You can carry two weapons at a time as well as grenades and a pistol. All of the weapons feel extremely powerful and are fun to fire. The Lancer will be your standard purpose weapon for most of the game. It’s a fully automatic machine gun with a pretty good rate of fire, but it also features a chainsaw bayonet, allowing you to cut enemies in half if you manage to get in close. The shotgun is also extremely powerful at very close range. It has the ability to rip enemies into pieces in a single shot. Other fun weapons include the torque bow which is an explosive arrow launching weapon and the hammer of dawn which is a satellite particle-beam weapon.

Reloading weapons can take a bit of skill in Gears. All weapons have a set reload time, but you have the ability to reload faster by performing an active reload. Underneath the weapon icon on the screen is a multi-colored bar that looks a little bit like a golf swing meter. When you reload, a line goes from the left to the right of the bar. If you press the reload button a second time when the line is over the gray portion, you will reload the gun faster. If you press the button when the line is over the smaller white area, you will not only reload faster but you will do extra damage. If you mess up and press the button at the wrong time, the gun will jam and take extra time to reload. The fast reloading isn’t all that difficult to do, but getting the extra damage requires very good timing.

The graphics in the game are absolutely incredible. There is simply nothing out there on any other platform that comes close to providing the amount of detail and beauty that Gears of War has. From the characters armor to a large building, everything in the game features an absurd about of detail. The environments are as varied as they are beautiful. They range from destroyed city streets and rainy forests to underground caverns filled with flowing lava. The visual differences between these environments are huge, keeping you constantly impressed with the game’s visuals. It’s also worth noting that the game runs at a rock solid frame rate. 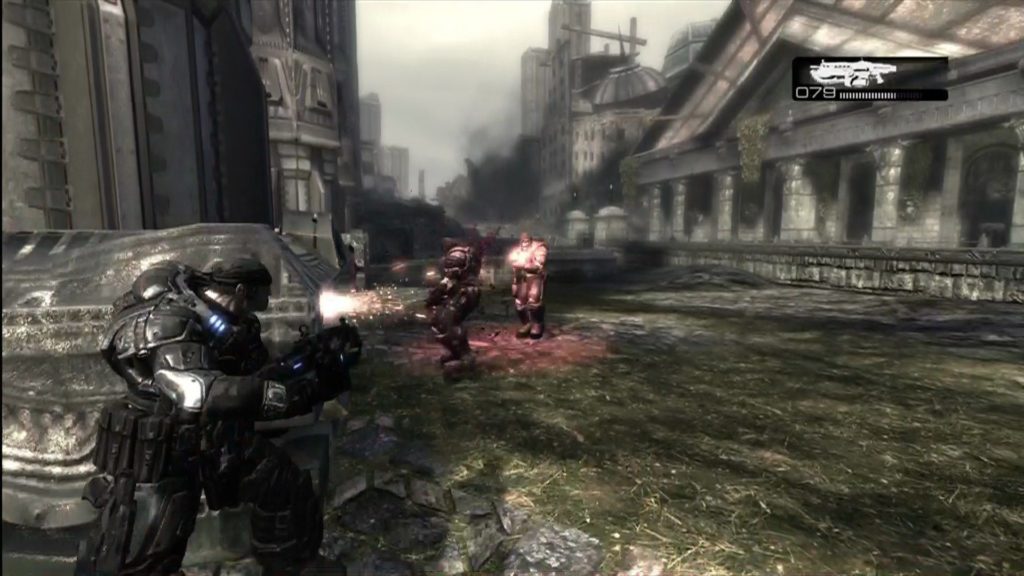 The single player campaign will take most players between 10-12 hours to complete (depending on the difficulty setting). But after you finish the single player portion of the game, the multiplayer component will keep you coming back for months. Online matches feature four-on-four action in compact but perfectly designed levels. The gameplay is round based without the ability to respawn, making every life count. Gears features three different game types to choose from. Warzone is your standard deathmatch where the objective is to eliminate all of the enemy players. In Assassination, one player is the leader and all of the other players must defend him. Lastly, Execution is a lot like Warzone, except downed players will eventually get back up if you don’t get in close and finish them off. The ten excellently designed levels provide players lots of opportunities to work with teammates and perform flanking maneuvers. Voice communication is extremely important and playing smart and using cover effectively is essential if you want to do well in the online matches. The amount of skill and tactical depth to the game is sure to keep you coming back for more.

Gears of War truly is a complete package. The single player campaign is constantly fun and intense for the 10 or so hours it takes to finish. The three difficulty settings, achievements, and co-op will give you some incentive to go back and play through the game multiple times. And the online multiplayer is extremely addicting and should keep you playing for a long time. While a slightly longer campaign and more multiplayer maps would have been nice, it’s tough to ask Epic games for anything more. Gears of War makes good on its promise of great gameplay and amazing graphics, and is reason enough for any action game fan to buy the Xbox 360.