Granted Ridge Racer 7 is different then Ridge Racer 6, it still uses a lot of the same assets and tracks. Generally the 360 version looks noticeably better with better AA and AF as well as better water and lighting. Pretty interesting considering the Xbox 360 game is a year older. This is not really all that surprising though, considering the 360 has a more flexible memory architecture as well as a better GPU. 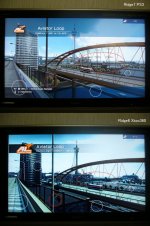 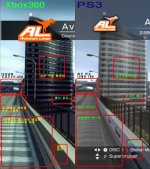 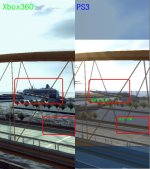 In other news, Nolan Bushnell, the founder of Atari, had some unkind things to say about the Sony/PS3 in a recent interview with the Red Herring.

I think Sony shot themselves in the foot… there is a high probability [they] will fail. The price point is probably unsustainable. For years and years Sony has been a very difficult company to deal with from a developer standpoint. They could get away with their arrogance and capriciousness because they had an installed base. They have also historically had horrible software tools. You compare that to the Xbox 360 with really great authoring tools [and] additional revenue streams from Xbox live… a first party developer would be an idiot to develop for Sony first and not the 360. People don’t buy hardware, they buy software.

Ouch. A shining endorsement of the 360 and a stunning condemnation of the PS3 from one of the founding fathers of gaming.