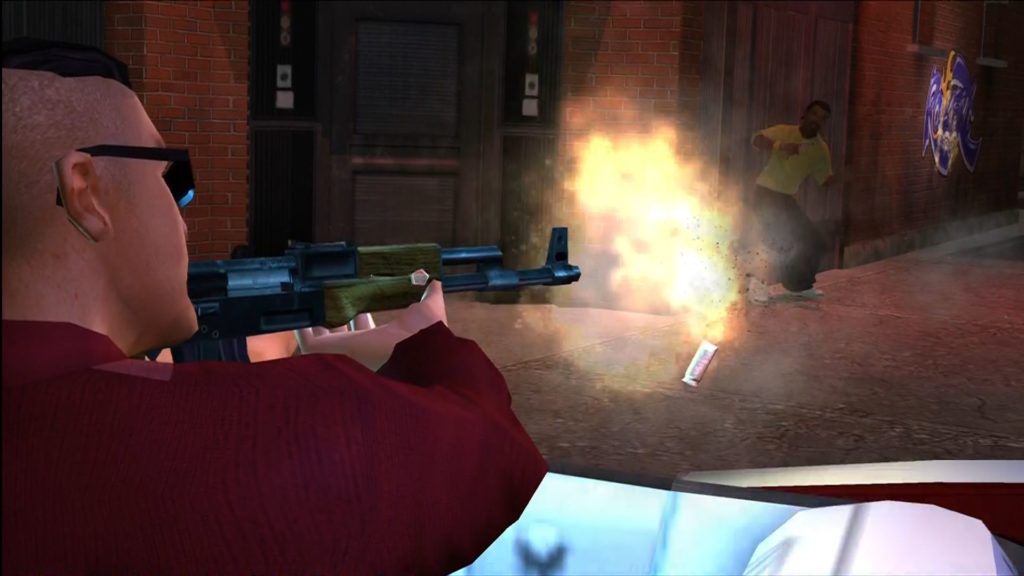 Welcome to Stillwater, a modern American city full of great food, commerce, and unrestricted gang warfare. With the 3rd Street Saints, Vice Kings and the Carnales waging a city wide turf war for supremacy, there has never been a better time to visit.

The game opens up with your customized character getting caught in the crossfire of a gang war. You are saved by Julius, the leader of the 3rd Street Saints, and are recruited into his gang in an effort to clean up the streets. The first couple of missions serve as a sort of introductory sequence that teaches you the mission structure of the game and introduces you to some core characters. The game has three different story arcs, one for each rival gang, for you to tackle in whatever order you would like.

After each story mission you must build your respect before you will be offered the next one. There are numerous ways to build your respect, but the easiest way to do it is to take on various side missions located throughout the city. These missions range from drug trafficking to street racing. The activities get harder as you complete them, maxing out at level 8 and awarding you a prize such as unlimited shotgun ammo at your crib or taking less damage in car crashes.

Almost all of activities are pretty fun, but the two most enjoyable are probably mayhem and insurance fraud. In mayhem, you are tasked with going to a certain area of the city and causing as much damage as you can within a certain amount of time. You are always given a few weapons with unlimited ammo and bonuses for destroying certain targets. Destroying everything in sight with a rocket launcher on mayhem’s level 8 is one of the most enjoyable moments of the game. In insurance fraud, you attempt to throw yourself in front of traffic to collect money from lawsuits. You earn bonuses based on things like air time, hitting police cars, and the number of witnesses.

Besides those side missions, there are a few other ways of gaining respect. Robbing any store you want will give you a small amount of respect. Tagging over other gang’s graffiti will also net you some respect. To help you speed up the time it takes to earn respect, you can spend your money on clothes, jewelry, and tattoos for your character. These items give you respect bonuses when you complete missions. Overall, the side mission system works pretty well. It creates a good pacing for the game, preventing you from blowing through the missions in just a few hours. 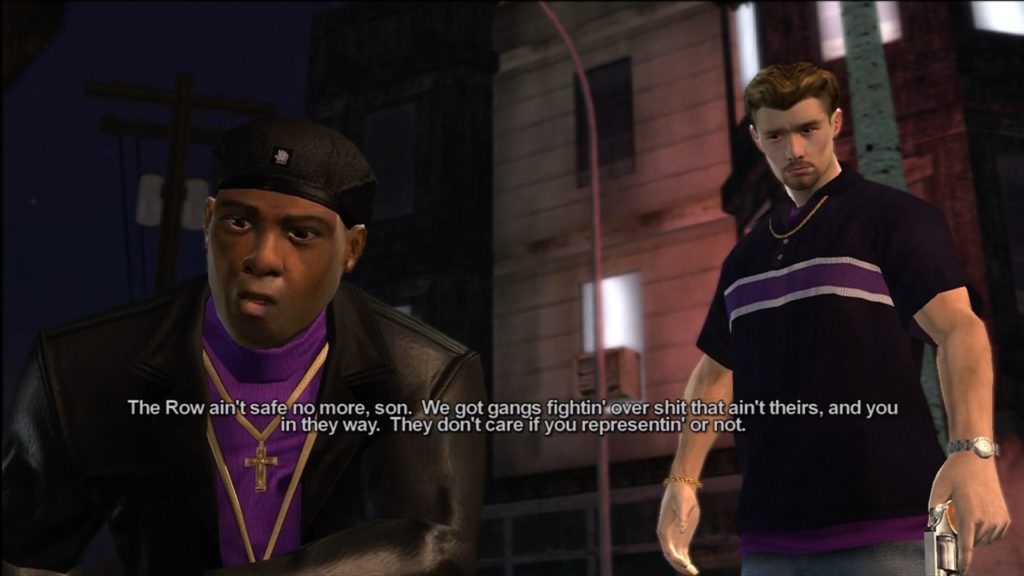 Besides allowing you to unlock new missions, as you gain more respect you will be able to recruit more “homies” (up to three at one time). “Homies” are friendly gang members which will help protect you by shooting out of car windows while you drive and following you around on foot. They do a pretty good job of helping you kill whoever is attacking you and hardly ever get stuck on objects such as trees. When they die, you have thirty seconds to revive them before they are permanently dead. At first this sounds like it would make the game too easy, but the “homies” are not overly effective, and don’t take too much to kill. If you had to go find new ones every time one of them died, it would become pretty frustrating. So having 30 seconds to revive those that died turns out to be pretty convenient.

When you are not building up respect, you will literally be taking back the city block by block. Completing a story mission in a certain area of the city will put that area under the control of your gang. Controlling areas of the city actually has some impact on the gameplay. You will see friendly gang members patrolling the streets, providing you a safe area to run to if you are being chased by police or enemy gang members. Controlling different districts also gives you money every day that you can get from your safe back at your crib. The more territory you control, the faster you gain money. You also get new save points as well. The game allows you to save whenever you want, placing you at the closest save point from where you saved when you reload the game. So controlling more save points is definitely nice. Sometimes rival gangs will attack territory that you control, at which point you need to stop whatever you are doing and rush there to help push back the attack. If you wait too long, you risk losing your territory. This is a nice touch, and makes you feel like you are just one small part of a larger turf war.

The story missions themselves are pretty well designed and not overly difficult or annoying. There were many missions in Grand Theft Auto 3 and Grand Theft Auto San Andreas that I personally found extremely annoying and simply not fun to play. While the missions in Saints Row are challenging, I didn’t run across any annoying missions like those in the GTA games. I always felt like I was making progress. The cinematic sequences for each of the missions are pretty well directed. The voice acting is great as well. The storyline turns out to be memorable and one of the highlights of the game. 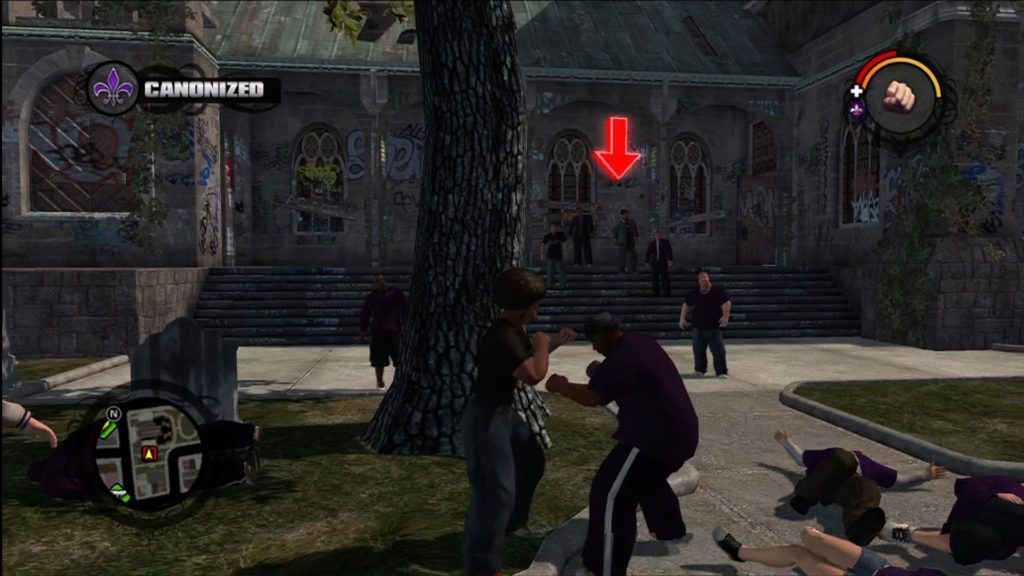 While playing the game, it’s safe to say that you will be doing a lot of driving and shooting. The game features tons of cars, all with rock solid control. While none of them are real licensed cars, they all look different from each other and handle differently as well.

There is a pretty good selection of weapons in the game as well. Most of what you would expect to see is here, including pistols, machine guns, rifles, rocket launchers, grenades and more are present. The shooting controls are vastly improved over those of Grand Theft Auto, allowing you to control the player like you would in a first person shooter. You won’t find any lock on targeting here. This goes a long way in making the firefights much more intense and fun then those in GTA.

The game features other big enhancements over Grand Theft Auto, the most important of which is the map system. At any point during the game you can bring up the map to set waypoints and locate new activities and missions. You can sort the map by stores, activities, missions, strongholds, and cribs to make finding locations very easy. The on screen minimap will show you the most efficient route to your waypoint or next objective, which makes navigating around the city a breeze. This is especially helpful during fast car chases.

Another small but significant improvement is the ability to shoot enemies in cars through the windshield. So instead of having to fill the car full of lead to get it to stop, you can instead take out the driver with one well placed shot to the head. This is extremely useful while in car chases. Since you can drive and shoot at the same time, it’s not that difficult to shoot the driver of the car chasing you through his windshield.

Besides those gamplay enhancements, Saints Row is also packing some amazing visuals. The entire city of Stillwater is rendered in glorious high definition. Everything in the world is extremely detailed. The game also features pretty good looking lighting and real time weather effects. The cars in the game look excellent, especially the way they crumple on impact. When cars explode, they send pieces of metal and tires flying everywhere. The frame rate is mostly pretty solid, though it can take a dive at times when there is a ton going on. However, this never hindered my enjoyment of the game. 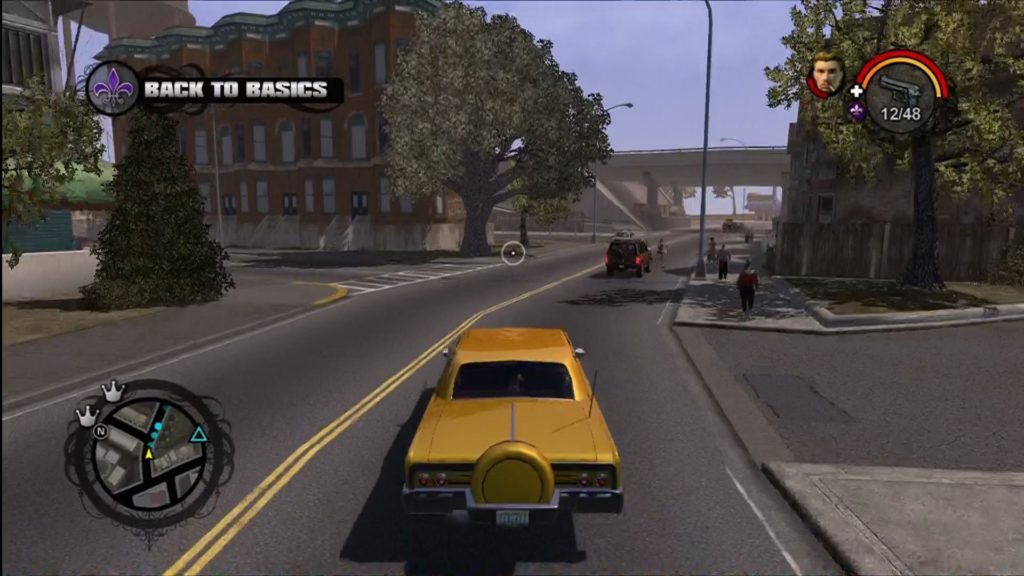 The biggest criticism that you could have against the game is its lack of originality. In my opinion, there is nothing inherently wrong with a game copying another, especially when it manages to improve on its inspiration. The fact that Saints Row sticks pretty close to the Grand Theft Auto formula means that inherits many of the good qualities of the GTA series, making Saints Row a pretty good game in the process. Since it does manage improve upon GTA in many aspects, it’s worth while for fans of the GTA series to play it. It’s probably fair to say that if you liked Grand Theft Auto then you will enjoy Saints Row. If you found some aspects of GTA annoying, as I did, then it may turn out that you like Saints Row even more. In my opinion, Saints Row is the best game of its kind to be released. When GTA 4 comes out later on it may vary well topple Saints Row, but until then, Saints Row is the king of free roaming action games.