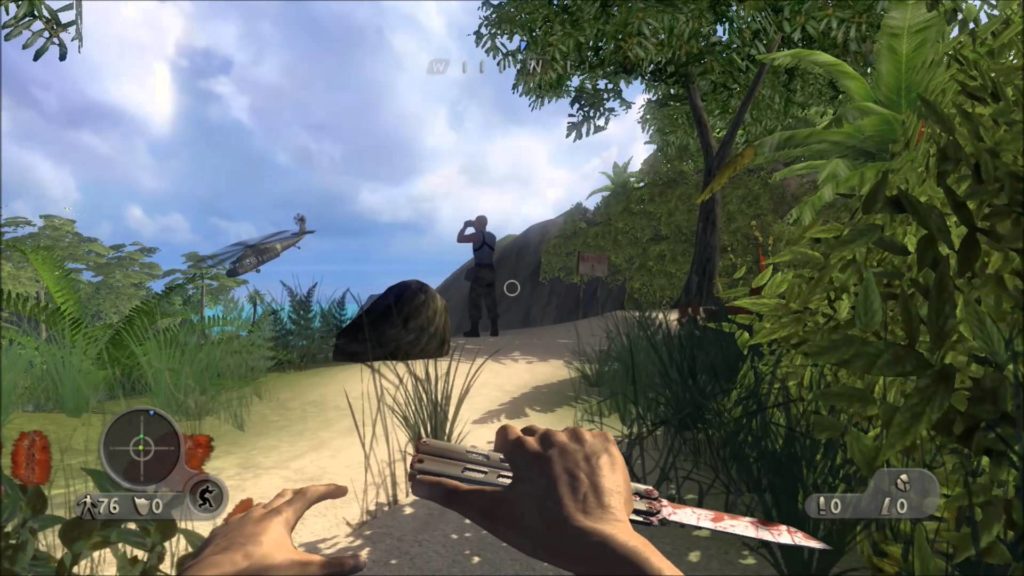 Far Cry Instincts Predator is a repackaging of the Xbox game Far Cry Instincts and its stand alone expansion Far Cry Instincts: Evolution. There are some minor differences between the two, such as improved graphics, but this is more or less the same game that came out months earlier on the original Xbox. It is important to make that clear right away so there is no confusion over what exactly you are getting.

For the main campaign, Far Cry Instincts Predator puts you into the shoes of Jack Carver, a retired Navy commando who now pays the bills by taking tourists out on his boat. After being hired by a woman to take her to a mysterious tropical island, Jack finds himself on the receiving end of a helicopter gunship. With his boat destroyed, Jack must find a way to rescue the woman and get off of the island. Of course that sounds a lot easier then it actually is. You will discover that there are some odd things going on deep inside the jungle, something that an army of mercenaries don’t want you to discover.

The game’s setting is probably the most important part of the game. The entire main campaign takes place on one huge lush tropical island. This setting opens the game up to some interesting gameplay. For most of the game you must rely on Guerrilla warfare since you are almost always outgunned. Hiding in the jungle and sneaking around is a big part of the game. It is possible to sneak up on enemies and perform stealth kills by stabbing them in the back. You can also set branch traps on trees, and then throw rocks to lure unsuspecting enemies to their death. There isn’t much that is more satisfying then taking out whole groups of enemies without any of them ever seeing you. While stealth is more of a suggestion rather then a strict requirement, you will have a much easier time covertly taking out as many mercenaries as you can then if you run in guns blazing.

That’s not to say that there isn’t a ton of gunplay to be found in the game. The firefights can be pretty intense at times. There is a pretty good selection of weapons, though they are pretty much what you would expect to see. You have your assault rifles, machine guns, sniper rifles, shotguns and more. Jack can carry three weapons at once: a pistol, a medium weapon like an assault rifle, and a heavy weapon like a rocket launcher. This doesn’t include grenades or claymores that you can use as well. You can also dual-wield many of the games smaller weapons.

Your most effective weapon in the game though is definitely your own two hands. Not too far into the game, Jack becomes a victim of one of the strange experiments going on (this is written on the box, so it’s not really a spoiler). The experiment gives you “feral abilities” like super human strength and speed. Early on you can essentially rip enemies apart with your own bare hands. As you progress through the game, you are constantly getting new tricks. For example, you will gain the ability to pick of sent trails from your enemies, or run extremely fast and jump incredible distances.

You can also take control of a few vehicles in the game. These range from ground vehicles like ATVs to water craft like jet skis. There are even a few hang gliders in the game which you can use to fly around the huge environments. While you can shoot while in the vehicles, driving and shooting is pretty difficult. The awkward vehicle physics can make a lot of the vehicles frustrating to control. You will mostly use the vehicles simply as a way to travel across the big levels.

There is also a pretty good variety in the environments. While most of the levels take place in large outdoor jungles, there are a few underground levels as well as a volcano fortress to mix things up a bit. This keeps the levels feeling pretty fresh throughout since looking at a bunch of trees the entire time could get a bit boring. On the PC, Far Cry featured very open ended levels, where you could pretty much pick your own path through the island and tackle objectives in a variety of ways. This seems to have been scaled back for the console game. The underground levels, which last for a good amount of time, are completely linear. The outdoor levels do offer you more freedom then most first person shooter, but they feel pretty linear compared to the original Far Cry game. Perhaps this was due to technical limitations of the first Xbox, but it is unfortunate that one of the best features of the original game has been watered down.

Once you have finished the Instincts campaign, which should take you around 12 hours or so to complete, there is the Evolution campaign for you to tackle. It is no big surprise that it is actually pretty similar to the main campaign. It is an expansion after all. This time around however Jack Carver is hired by a woman (again) to help her with some illegal gun-running. As you would expect, things don’t go as planned. Shortly after delivering the weapons, rebels attack, stranding Jack on another tropical island. While the expansion is still a good amount of fun, it doesn’t manage to meet the same level of excitement as the first campaign. This is mostly because it doesn’t manage to feel as fresh.

Since this game is set in a tropical island very similar to the last one, the game plays almost exactly the same. There are, however, a few changes in the level design that are worth mentioning. On the good side, some of the levels feel a lot more open ended this time around. For example, early on you will have multiple objectives across a few smaller islands that you can tackle in any order you want by using boats to travel between them. On the bad side, the game has some very annoying jumping puzzles later on that seem to simply be there to extend the length of the game. Also, sometimes there are infinite amounts of enemies that spawn in. It may take a while to realize what is going on and that you are supposed to just move on.

There is one bug that shows up pretty often during both campaigns that deserves mentioning. The bug involves locking onto enemies to use your claw attack. Similar to the sword attack in Halo 2, when you target an enemy to attack them with your claws, the game automatically has you fly in a straight line towards your target until you hit them. The problem is that it is extremely easy to get stuck on objects while flying towards your victim. When you do, you will be unable to move until the game gives you back control. The problem is that it takes way too long for the game to realize that you are stuck and give you back control. There will be many times when you will die because of this, and it can be extremely frustrating at times.

There is not much else to say about the expansion campaign. It’s pretty much just more of the Instincts gameplay with a new storyline. But that is not necessarily a bad thing since Instincts was pretty fun. The Evolution campaign should take most players around 6 to 8 hours to finish. After finishing both campaigns, there is still the multiplayer left to check out.

Far Cry Instincts Predator has great Xbox Live support. It is one of the few games to feature an easy to use map editor. It’s surprisingly easy to create your own levels. Most of the map editing is point and click, so you can very quickly develop and test your own ideas. When connecting to a game running a custom map, it is automatically downloaded. The custom map editor combined with a good number of retail maps and game types makes the multiplayer experience pretty solid. You could easily spend a good amount of time playing this game online.

Overall, Far Cry Instincts Predator is a pretty good game. It is a complete package that features a ton of content and is definitely the best version of Far Cry to date. That being said, if you already own Far Cry Instincts on the Xbox, there is not enough here to warrant buying the game again. You would be better off just buying the expansion separately. But if you have yet to play Instincts, this is the best version to play.

On a side note, I have to take issue with some of the other reviews for this game out there. Review sites such as Gamespot gave Far Cry Instincts a significantly higher score then Far Cry Instincts Predator. Considering Predator contains Instincts and Evolution as well as some minor upgrades, it is definitely the better version of the game and in my opinion deserves a higher, not lower, score then the original. The gamplay is no less fun today as it was when the game first came out on the Xbox. The lack of true next generation content (such as a major upgrade to the graphics) does not make the game any less fun then it already was.