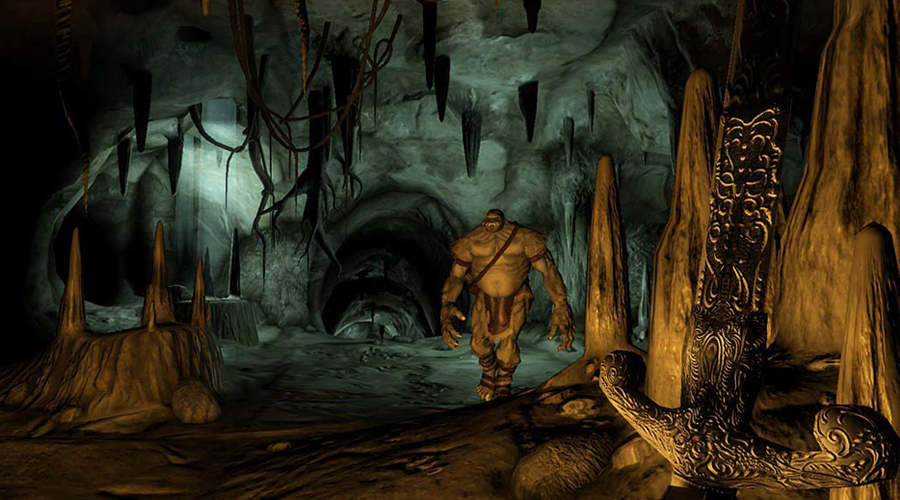 I hope you have a lot of free time on your hands. In fact, its best to say goodbye to your friends and family right now, you aren’t going to see them for a long time. The Elder Scrolls IV: Oblivion will instantly suck you into its world and keep you there for months. Its do-what-you-want gameplay and massive world combine to create an almost flawless game that is incredibly fun to play and improves upon the previous installments.

The good news is that you don’t need to know anything about the previous Elder Scrolls games. The game opens with the emperor’s assassination by a demonic cult which allows these portals called “Oblivion Gates” to open all over Cyrodiil. Your job is to figure out a way to close them. The story manages to pull you in right from the start while still allowing you to freely explore the world and take up any other quests that might interest you.

Of course you could just as easily ignore the main quest all together and let the people fend for themselves. Feel like exploring the wild? Want to become a thief and steal everything in sight? How about going hunting or becoming an assassin? The game does not exaggerate when it asks “What do you want to do today?” There are hundreds of quests, and you will find that you always have something that you could be doing. Even though the game has a remarkable amount of things to do, the game manages to never feel overwhelming. Maybe it’s due to the quest log, which keeps all of your quests organized nicely. Or maybe it’s the fact that you never actually feel obligated to do any of it. You only have to do what you want to do. So while the main quest will take most people between 20-25 hours to complete, there is easily 100+ hours worth of content in the game if you choose to explore, which you will want to do.

The world of Oblivion is just amazing. Not just in the sheer size of the world, but in the story as well. You really get a feeling that this world has its own culture and history to it. In fact, there are even books you can read in the game about the history of the world. There is a lot of depth to the world if you want to go looking for it. The main quest does a good job of making you go out and do some exploring, but you will only uncover a fraction of the world. There are tons of things to discover out in the wild including dungeons, shrines, forts and even hidden towns. I think it is safe to say that the majority of players will not even see half of what is there. Because the world is so huge, getting around it could have been a problem. Luckily the game features a “fast travel” system, which allows you to quickly travel to locations that you have already discovered. When you fast travel, it simulates the amount of time that it would have taken you to walk there, which is a nice touch.

The combat in the game feels good and intense. Of course the type of character you make can drastically change how the combat works for your character. I personally made a warrior, so I was involved mostly in close combat (with a bit of spell casting). The combat in the game was pretty simple to learn. You basically have quick attacks and power attacks. As you level up your weapon skills, you gain special attacks. You can use these attacks (like disarming an opponent) by pressing in a certain direction while attacking. You can also block incoming attacks with your weapon or shield if you decide to use one. Battles can have a sort of rhythm to them, with you blocking enemy attacks, following up with your own attack, and then blocking again. The ranged combat in the game also works pretty well. There is a wide range of bows and arrows that you can use as well as a bunch of ranged spells. It feels pretty smooth overall.

Experience in the game is done pretty well too, and a bit differently then some might expect. You gain experience in different skills simply by performing the action. So if you want to increase your blocking skill, you simply block attacks while in combat. You level up your stealth skills by sneaking around. It makes the leveling up system feel more natural and less contrived.

The visuals in the game are amazing to say the least. The outdoor environments are by far the best in any game. The forests are full of trees, rocks and plants that all animate with the weather. The HDR lighting is in full force, which helps to create some beautiful looking outdoor landscapes. The amount of detail in everything is also impressive. Weapons and armor (as well as all the items in the world) are beautifully modeled and textured. The only thing negative about the graphics is that the frame rate can slow down a bit at times. It is mostly noticeable while riding around the world on horseback when the game is loading the next area. But for the most part the Xbox 360 gives you pretty solid performance.

The audio in the game is exceptional. Every single character you will meet in the game has full speech. Given that there are hundreds of characters in the game, this is an amazing achievement. All of the voice acting is superb as well. While it would be nice if there were more voice actors in the game so you would not hear the same voice as much, there are a decent amount of voices. The music score in the game is also perfect.

The AI in the game is actually pretty special. Bethesda has created what they call “radiant AI”. Basically what it does is it gives all of the characters in the game daily routines that are not scripted. For example, if a character decides they are hungry, they might go find some food. When they are tired they go to bed. In the morning they will wake up and go to work. And the system allows for some variations within that schedule. So some days a character might sleep in or something similar. Characters also have dynamic conversations with each other about stuff that is going on in the world. While the conversations can sometimes feel a bit stiff, they are pretty impressive and go a good job of making the world feel alive. Characters also behave differently based on how much they like you. This can effect things like what or how much information they give you on certain topics, to if they will help you if they see you in trouble.

Overall, this is one of the best RPG experiences you can find anywhere, and the strongest game the Xbox 360 has to offer so far. It is pretty clear that Oblivion has been a labor of love for the developers. They have poured all of their effort and creativity into this game and created the best single player RPG to come around in ages. This is a game that almost anyone can truly enjoy.